My post below on the engrossing Panorama programme on Alan Johnston was written shortly after it aired, but the day job seeps into nights and weekends so much that I rarel 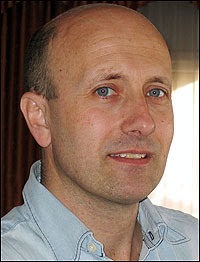 y have time to post my (long and rambling) thoughts. One thing the apparently incredibly decent Alan mentioned in that interview and others he has been giving was that the night he was taken hostage in Gaza, the kidnappers' leader told him he would one day go free, write a book about his experience, and get married. Whilst that was an odd proclamation, it did at least reassure him that he had a future, although it obviously implied that he was to go through something life-changing, which was a worry. Fortunately, four months later, he was freed. Now, today, he also publishes a book, Kidnapped and Other Dispatches, which at present is available from Amazon for £3.99. The Guardian published an excerpt on 17 November, which can be read online .

So people will undoubtedly note that one prediction remains to be fulfilled: that Alan will get married. In the Panorama programme, he laughs when Jeremy Vine asks whether it was time to settle down with a wife, terraced house, and white picket fence, and Alan says that may just be too radical a change to his lifestyle. It’s clearly no one’s business but his own, but I do find myself hoping that this seemingly kind-hearted stranger takes his time and finds someone truly special, and doesn’t rush into anything. Whilst my friends know me as staunchly independent and thus not a huge advocate of marriage, I’m not preaching against it in principle as I’m sure it’s lovely when the right (mature!) people really believe they want to make such a commitment and be that together for the future. I just worry that he might be besieged by ‘groupies’ who are either drawn to anyone in the public eye or are, like me, astonished to find there are still such fine humans out there, and single at that. He is, after all, and despite his welcome reassurances that he is recovering well from his ordeal, surely still in some state of bereavement for his old happy life in Gaza, which is lost to him now, and dealing with a haunting, traumatic experience that no one else can truly understand.

I am also aware how a trauma can leave one feeling a lot more open to the prospect of a relationship—inappropriate or otherwise, which can leave one in a worrying and vulnerable position. After my beloved father’s sudden death and the ongoing agonising suffering I feel for that, I initially found myself feeling so tired. Tired of always having to be strong. Tired of having to cope with everything on my own, whereas before I had always been so proud of my independence and never wanted to be tied down in a claustrophobic, limiting relationship. For a while, I started to think it might not be so terrible to have someone to lean on, just slightly, every now and then. I used to like to be the crutch to friends and others in need, but here I found myself thinking maybe I just might do with a bit of support myself. For a while then, as I began to notice the world carrying on around me again, I found myself feeling slightly receptive to the idea of having someone to share things with for the first time in an age. I would look around a meeting room at colleagues whom I never would have considered to be suitable potential partners before, and make excuses in my mind for what I’d previously seen as shortcomings. People who were plain, quiet and gentle suddenly seemed heroic to me. They offered a calm stability. I couldn’t cope with any more noise, pain and turmoil, and surely these quiet, serene people whom I perhaps had never particularly noticed before held the answer to my happiness.

That was all fairly ludicrous, although I couldn’t see that--or anything clearly--at the time, and it did contribute to me going out with someone very quiet who I’d not really noticed before and would never have thought of as someone I’d be attracted to earlier. At the time, he seemed to become fascinating and perfect. There were, indeed, many good things I discovered about him, and I felt that more people were missing out by dismissing these tranquil, unassuming people lurking in the shadowy corners of the room. But I’d let my guard down and failed to take stock of the true situation, failed to run my usual checks in any way, and foolishly took him at his word. Obviously, just because he had these placid characteristics did not mean he was automatically an honourable man. Just when I felt like I might, unusually, actually fall for him, I learned he already had a girlfriend, whom he hadn’t felt it important to mention in the month we’d been seeing each other, who didn’t understand him and whom he intended to leave when the time was right, etc, etc, etc—the same old story. Needless to say, that was a shock and the first of many boulders I hit whilst rolling downhill—which at least was a way of moving quickly away from this ill-advised situation and leaving the duplicitous creature to his former life without me.

I see now, a couple years later, that I had let this total exhaustion, this feeling of just being too tired to deal with any more challenges or jolts on my own, take over everything, and I’d shut down my brain and normal senses and sensibilities, which was a mistake. I suppose a compromise between that reckless abandon and my usual walls-up I-am-an-island stance is the answer.

Alan Johnston seems so much more sensible and, I sense, stronger than I am. I am not unintelligent, I am not lacking in street wisdom; I am more or less back on my feet though still, of course, suffering badly from the endless void created by the loss of my father, my foundation, but I feel strong enough now to help support someone else who needed someone to lean on slightly, or at least perhaps if I came across such a person, we could lean on each other. Though I’m not looking and still enjoy my life on my own.

But I wonder if Alan will be thinking more of this prediction that he will marry. Most people do marry eventually, after all. And perhaps, after the wild experiences in the dangerous places he has been based, and the shock to his system of the kidnapping ordeal, which will surely affect him for years and cause the odd sudden scream in the night, no matter how impressively reassuring he is that he’s fine, he may now be feeling receptive to a slightly more conventional life—albeit without the picket fence. I have no doubt there are plenty of intelligent, understanding, kind people out there who would welcome him into their lives and provide him with anything he needs. And although he is a stranger to me, I truly hope that he finds that woman rather than someone who mentions, just as he falls for her, that she has a boyfriend….or somehow isn’t quite the one.

I remember hearing a comment by writer and former Beirut hostage John McCarthy that his wife knew nothing of his being a hostage; he’d met her much later through work on a book and was somewhat comforted that she knew him as John McCarthy rather than as John McCarthy the Hostage. I can understand his feeling, although I wonder how his wife could have been so sheltered from the news. I do worry that there are many ‘groupies’ out there who are keen to latch onto any hero, anyone with a modicum of celebrity, anyone in the public eye who they mistakenly think they know. And I acknowledge that here I am, talking about something personal to someone I don’t know, which isn’t much better. But he seems so likeable and deserves happiness and peace now, I find myself hoping he finds it.

Personally, my ideal man now would be someone soft-spoken, well-grounded, highly respectable, excellent at his job, intelligent and well-educated, talented at writing, appreciative of small pleasures and blessings, calm, sensible and possibly away for long periods of time (sorry, but I’m highly independent and need lots of space!)—and though what little we think we know of Alan Johnston seems to fit much of that bill and he has a tremendous family and lovely physical features to boot, I don’t know Alan Johnston and I’m not a stalker/groupie/freak, so he needn’t worry that I’ll be lurking in the bushes outside his home. I hope no one is, and that he finds (not in the bushes) someone great for him when he’s ready.

Meanwhile, I will still hold open my offer to buy him a coffee if he’s ever wandering through the City of London where I work, because I’m decent friend (or acquaintance) material, if I do say so myself, if perhaps a bit too dull and busy with work, and he deserves everyone to buy him a drink of some sort, which I’m sure happens. And as soon I get my awful financial situation sorted, his book will be one of the first treats I buy.

[Alan will be taking part in an RSA lecture in London next week and is participating in a live webchat today, answering questions posted previously on the Guardian’s OrganGrinder blog. I admittedly posted a question for this earlier this week but not one of the more exciting ones, and I’m disappointed but not surprised to see two women offering themselves to help fulfil the remaining prediction! Beware the groupies, Alan! But good luck with everything else.]