Darryl, who has brought me endless cheer and looked after me beautifully well over the past 19 years.

Darryl, who was born in my bedroom in Chapel Hill, North Carolina, in 1989, died on 2 June in my lounge in London, England, at the human

equivalent age of 93. He was a Pewter Persian, born to my Blue Persian called ‘Boop’ and my mother’s Chinchilla Persian called ‘Baby Boy’, who was lovely but a bit slow in every way. Darryl inherited most of his dad’s looks but fortunately his mother’s smarts, and immediately set out to embrace life for all its beauty and fun.

His energy was a marvel, and my friends learned quickly to tolerate the constant jangling noise in the background as Darryl continually batted a toy octopus dangling from a string tied to the refrigerator door handle, ringing its little bell for literally hours until pausing only to let out a yowl to inform us that he’d hit the toy so hard, he needed a taller mammal to retrieve it from the top of the stove. When he took a break from all that play, he would fall asleep in one of my shoes--something he carried on trying to do later in life ‘til he realised it wasn’t as comfortable if most of you didn’t fit inside—or between cushions of the sofa, usually upside down as though he’d accidentally fallen there and nodded off on the way

down. He loved everyone and everything, and seeing a sitting human or another sleeping cat was, to Darryl, in invitation to go crash immediately beside them or upon them. He carried on an intense fondness for lap-sitting as an adult; finding a refusal incomprehensible, he would make a determined move for a lap even if it were filled with a tray of dinner at the time.

This irresistible vivaciousness twisted fate when I could not bear to leave him. He was the runt

of a litter of three, two of whom looked so similar, I called them ‘Darryl’ collectively, since I did not intend to keep any of the litter (an allusion to the sitcom Newhart, which had three hillbilly brother characters, two who were mute and the other who announced them every time they walked into a room: “Hi, I’m Larry, this is my brother Darryl, and this is my other brother Darryl.”) I carried on calling him “Baby Darryl” throughout his life. (He is in the foreground here.)

After a difficult six months in quarantine with my older Chocolate Persian Tava, whom he

worshipped like a big brother but who, perhaps just like a big brother, liked his space and saw Darryl as a bit of an over-enthusiastic pest, he joined me in London following my marriage, and was just as overjoyed as I was when freedom took hold and we moved to our current flat. Again, visitors had to adjust, this time that they could only ever see 75% of the television screen as the rest was covered by Darryl’s fluffy head. An ardent television aficionado for many years, Darryl’s favourite sport was drag racing, though he was frustrated at not being able to capture the cars when he reached around the side of the telly once they veered off screen.

An indoor cat, his prey was not just the myriad helpless toys lying around (and fascinating bubbles and playing light tag) but flies, which he would astonish me by capturing by leaping suddenly about eight feet in the air with 100% success. Fortunately, he never tried the same trick with wasps. He’d do a great imitation of a bolder lion every time he yawned, squeezing his ears together as his mouth nearly roared.

sure everything was covered up to his high standards, and fortunately he later bore with great dignity the consequences of being an elderly gentleman with cystitis, arthritis and weak back legs, a tricky combination if you need to get places quickly. (Mind you, he never let that stop him, and barely seemed to notice if he fell over, as he’d pull himself back up and carry on.) When Tava in 2005 had a shocking, massive seizure that left his organs failing, Darryl absolutely knew that Tava was about to leave and never come home, and he ran over to him, lay down beside him for a couple minutes, and then rushed away. He didn’t look for Tava when I came home alone, and he helped me tremendously in trying to deal with that grief.

He had amazing patience and enormous calm and dealt wonderfully with whatever cards were dealt to him. As he grew older, he time and again scared the life out of me with illnesses that made me think that was it for him—particularly recently getting e.coli in the bladder and then a dangerous reaction to the drug that treated it—but managed to surprise me and all the vets with his tremendous will to survive, always pulling through and often purring on the way. One vet suggested Darryl had got hold of a medical dictionary and was working his way through each page, throwing us all new challenges. But he always impressed everyone and beat the

struggles that challenged him.

In the end, he was patiently taking medicine to control his seizures and steroids to give his

weakening muscles a bit more strength, and he was running my daily schedule precisely without reference to any timepiece, just some gentle but effective murmurs to prod me awake and to announce mealtimes. He needed and deserved a lot of loving attention and nursing care in the 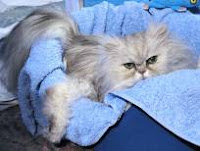 end, which I was all too willing to give, and he gave a lot back. The fact that he was 100% chirpy, delightful and charming as always on the morning that he died is heartbreaking, as I had to face the fact that, despite his amazing ability to beat illness time and time again, his rear legs were failing to such a degree that he could not really cope when I was at work. I did manage to take the last week to be at home looking after him, catering to his every whim in the end and spoiling him rotten, mostly with love but also with former Christmas-only treats like chicken. He continued to prove that he was the dearest heart and cutest sleeper in the world, and whenever I cried at what we were facing, his reassuring purr kicked in and he did what he could to cheer me. Sadly, he’s not here now to help me cope with this ultra-horrific void….

I can only hope that he is somewhere wonderful now, greeted by Tava if not my father, and that Tava is more tolerant of what would be Darryl’s youthful exuberance now that he is no longer held back by his crippled body. God bless Darryl, I thank him for sticking around against all odds for so long to keep me happy and coping, and I really pray that he’s enjoying himself now, leaping high into the air as he used to and whacking whatever would be the paradise equivalent of an octopus bell-toy to his adorable furry heart’s content.
Posted by Brain Tracer at 7:26 am No comments: