sculptures in the Elephant Parade, which was in aid of the conservation of Asian elephants, as I wanted to catch them in their ‘natural habitat’, ie the various places they’d been placed across London before they were lined up together as a giant herd on the lawn of the Royal Hospital Chelsea. I’ll post those photos later, but I made one diversion that day to an elephant-free zone that, oddly, was the one area where you might have more realistic expectations to see an elephant in that it was a South African landscape in London. (Mind you, these elephants were Asian and not African, so perhaps not.) 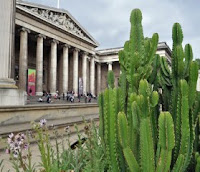 Kew Gardens annually transforms the forecourt of the British Museum in Bloomsbury into a different landscape, and this year they chose one depicting South Africa, given that at the time, the nation was looking forward hopefully (if not foolishly) to a successful, exciting world cup 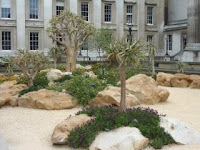 performance in that country.
Although it was raining and out of my way, I thought it would be an intriguing diversion, and I’m glad I stopped by. I was initially slightly disappointed as I anticipated towering rainforest trees and an elaborate landscape one could get lost in on the way to the 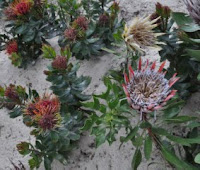 museum’s steps, when instead there was a small section of the forecourt representing the semi-arid rugged desert-like terrain of South Africa.

My grand visions were an ambitious, if not ignorant, expectation, and there was still plenty to enjoy. There was a certain pleasure to be derived from seeing cacti (well, tree euphorbia) and quiver trees in front of 19th century Greek Revival architecture. Many of the smaller plants took a bit more inspection to realise they were something extraordinary, and not the usual daffodils or dandelions. The

bird-of-paradise flower, African lily, restios, and aloe were a delight to behold. 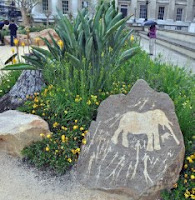 I did come across an elephant after all. Not one of the large brightly painted sculptures that formed part of the official elephant parade, but—in addition to the elephant’s foot yam plant and elephant grass on display, there was a sample of African rock art with an elephant on it.

The South Africa landscape will be in place at the British Museum until 10 October, and it costs nothing to visit (the museum is free as well, so you might as well pop in there for some additional enlightenment whilst

you’re in the area.) On the day I went, few people were wandering into it, the mass groups of foreign students choosing instead to flock on the museum entrance steps, so crowds were not a problem and I could meander peacefully, leisurely through. Stop by for a pleasantly subdued, unusual experience, a bit of Africa in Bloomsbury.
Posted by Brain Tracer at 11:08 pm No comments: