Electric Gig by Orchestral Manoeuvres in the Dark

I had the absolute joy of experiencing an Orchestral Manoeuvres in the Dark concert on Sunday (7 November 2010) at the Hammersmith Apollo in London, something the 16-year-old me

would have killed for in 1982 in the States when MTV first brought these amazing ‘new’ artists to my attention. I struggled to the concert on a Sunday (ie The Day of Sleeping Transport) excited but feeling that I should not announce with pride who I was going to see lest I be set upon by a set of youths, as somehow some people think OMD is no longer fashionable.

Frankly, they’re wrong. Look at the charts and playlists today and you’ll see that they’re full of acts influenced by, if not practically imitating, the sound of OMD. To paraphrase what Andy McCluskey and Paul Humphreys said in an interview, if everyone else was going to be imitating the OMD sound, then OMD might as well be making that sound, too. This was not just one of the many reformed 80s bands (not that I’m complaining) out on a greatest hits tour, either. OMD have a new album out, and it has been received well by critics as well as fans, with most saying it sounds just like the OMD of yore but fresh. Which surely, in the circumstances, is exactly what you want.

I have that album but, like the other dozens I have bought over the past few months, have not had time to sit and listen to it, so I raced through samples of it quickly before running for the train/replacement bus service to make the concert. And it does contain some wonderful OMD material. In fact, the first single, History of Modern Part I, is delightfully catchy synth pop with a wonderfully memorable keyboards riff. The next single, Sister Mary Says, was spoiled for me on first listen by the new video, as it reminded me too much of the stress of the everyday English news (bring back Joan of Arc riding Clydesdales into the winter night after playing chess with OMD in a beautifully warm cottage, I say), but without that is another good pop tune, which some feel nods towards their early hit Enola Gay.

These new songs were greeted with just as much relish by the Hammersmith Apollo crowd as some of the slightly lesser known old tunes at the concert on Sunday, which caused amazing 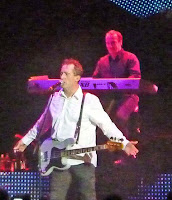 bassist Andy McCluskey to remark upon it, saying to Paul that something worrying was happening in that it was a London crowd and they even liked the new tunes, so it was safe for Paul to come out and sing his first song of the night, (Forever) Live and Die. Indeed, the generally more blasé and harder to please stiff London crowd rose to its feet the second the four early members of OMD took to the stage, and they remained there until after the encore, roaring and cheering, clapping to the beat without much encouragement, and adoring the people on stage.

I’ve never seen Andy McCluskey in person before so I don’t know how he tends to walk down the street, but no doubt it was this madly adoring mob before him that turned him into the astonishingly energetic, incessantly bouncing Tigger of a bassist that he was, bursting with a beam of glowing snow white teeth that joined his white shirt to portray some surely deceptively angelic vision before us. My friend and I, at 44, were constantly commenting on where a man of 51 could possibly find that much energy, but it was 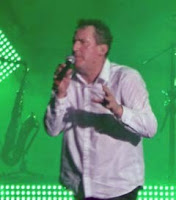 breathtakingly joyful. He raced about the stage, sometimes playing bass, sometimes waving his empty arms about histrionically, always interacting closely with the audience, and regularly shaking hands or whacking the many extended ‘high fives’ that were desperate for his attention. Obviously a heartthrob, he had to call the roadies out to clear away the lingerie that fans had flung onto the stage so that he could dance safely, after Humphreys suggested that we must be hinting that they should open a lingerie shop, assuming and hoping that the donated underwear was new and unused.

McCluskey joked about forgetting loads of lyrics during the performance, which didn’t show, and thanked us for sticking with the band despite loads of technical problems in the first part, which weren’t remotely noticeable other than his mention that he could not hear his voice through his earpiece, which just makes it more remarkable that that beautifully familiar, painfully emotional voice could emerge so perfectly. The light show was fine, the films behind them were enjoyable literal depictions of the songs (such as clips of silent film star Louise Brooks during Pandora’s Box, images of Vietnam during Bunker Soldiers 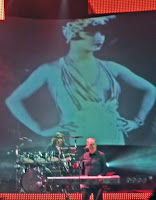 and World War II planes for Enola Gay, thankfully instead of showing the result of their handicraft).

The show kicked off with an impressively high-tech feel intro with two Blade Runner-like hologram heads appearing above us and singing to the great techno music being played as the band snuck onto the dark stage below. There were some additional recorded sound snippets played into some songs, which I normally would frown upon as I believe that live should mean live, but they consisted simply of such things as the ‘No, no, no!’ from the beginning of Tesla Girls, which is effectively part of the percussive beat, and when you’re dealing with synths, it’s okay to play these things as notes on the keyboard. Similarly, it was okay to leave the synth switched on and playing for us even after the band had left the stage before the encore. The real vocals were always fresh and outstandingly impressive, notably so on the chorus of (Forever) Live and Die, on which Humphreys sang the lead vocals while bassist McCluskey took the controls of his synth, but joined in on harmonies in the chorus to show that the two former teen friends’ voices blended mellifluously. I mention that example as I had assumed it required quite a bit of electronic treatment to accomplish the sound on the record, but no, their singing just really sounds that great.

Throughout the show, Paul Humphreys presented the calm, friendly figure one would expect, but oddly the pair rarely acknowledged behind them the presence of still life artist and multi-instrumentalist Martin Simpson, who usually sat concentrating on his keyboards but occasionally blasted a sax, and drummer Malcolm Holmes, whose hairy appearance would look more at home with a Free revival than this oft stylish band that came out with cropped hair and ties. I confess that, in the 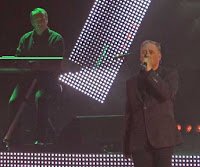 early days, I thought the band comprised just Humphreys and McCluskey on synth, which means I must have assumed the synth was sufficiently magical to produce such realistic bass, sax and drum sounds. It was marvellous to have the full band before us.

But this was just meant to be a quick note before presenting the set list to those of you who are interested in such things; instead, I’ve accidentally added a bit of my usual stream of consciousness mental meandering. A full review of the concert, or my play-by-play account of everything that happened, will shortly appear on my website http://www.aboutlastnight.org.uk/ . I’ll include more photographs there, although I have few since we were back in Row U, the lights were often dark, I never used a flash, and Andy in particular was, like some wildlife, too wriggly for me to capture without a flash and tripod, particularly through the constantly up-stretched, waving arms of the oddly dancing girl in front of me.

I believe the clearly crowd-pleasing set was as set out below, but as I decipher my scribble when writing up the full review on my website, I may well discover something I’ve missed…..

I could only have been more thrilled by the energetic experience if they’d played two other songs I adore: Telegraph and Was It Something I Said? (I particularly love McCluskey’s hurt, embittered growl on the line in the latter ‘Don’t you even have me on your mind!). But their omission genuinely did not affect the show being the most ecstatic and electric experience I’d enjoyed for ages, and I have strong, and I hope realistic, hopes that there will be a next time.
Posted by Brain Tracer at 7:40 pm No comments: