Some of you, like me, may have heard of the National History Museum’s annual

Sensational Butterflies exhibition and thought little of it, dismissing it as something for the kids.  But then I started to think, I love seeing nature, and I rarely see butterflies—just the occasional moths (which I’ve come to appreciate)—and here was a chance to be

surrounded by hundreds of them flying around and landing wherever I looked. By only travelling as far as South Kensington, I could stroll along a path and come across over 30 species of butterflies that I would not see unless I was wandering through fields in South America or South Asia.  That sounded like a guaranteed smile. I decided to give it a try one warm summer’s day. 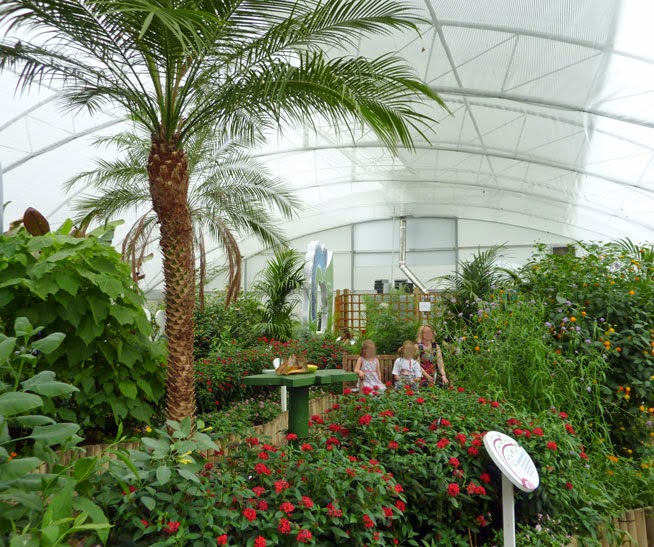 If I thought it was warm outside, I was whacked with a wave of thick heat as I entered the big white tent on the lawn of the museum, near the winter home of the ice skating rink.  I started upon a winding gravel path that snaked its way through the humid marquis amidst numerous shrubs, fruit trees and exquisite tropical flowers—and thus an immensely pleasant scent--with an enormous number of butterflies fluttering about.  They were everywhere.

If you looked up, they were dangling from netting on the high ceiling, several were sticking to the walls, loads were enjoying the nectar from flowers or resting on leaves on close inspection, and a member of staff kindly stopped me from crushing one beneath my feet (wouldn’t that have been mortifying) as I backed up to photograph another.  I even saw two mating, although I didn’t recognise that at the

time or I would have averted my eyes rather than snap a naughty picture. 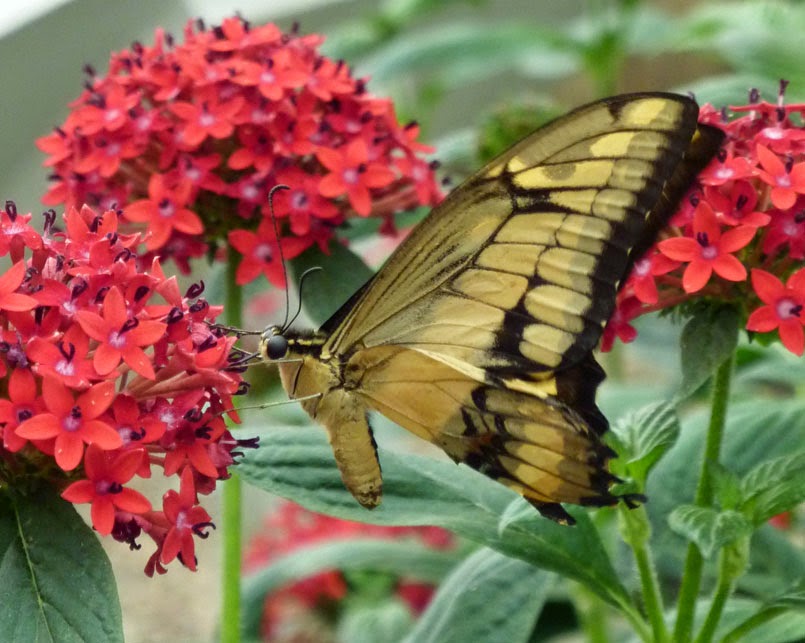 For children, there was a radio-like gadget they could crank up to hear the defensive sound of butterflies (who knew?) compared to those sounds that butterflies might be wary of hearing.  Yes, they hear, one of the signs told us; they have five senses like us. There were fun fact signs sprinkled around the tent enlightening us about how, for instance, female butterflies take great care to lay their eggs near the caterpillars’ favourite food plant, and suggesting how to attract butterflies at home since disappearing habitats are
leading to their decline. (Just grow a variety of flowering plants and shrubs, which you’d no doubt enjoy as well.) The signs, which were aimed at children, were often temporarily adorned by real butterflies that had landed for a breather.

Children were given fun activities to involve them that were beyond my comprehension as I didn’t have one of my own, but I did see some with a sheet on which to tick off various species that they identified.  One young girl stunned me by, rather than ticking them off, nearly picking one off.  Presumably forgetting why she was there, the girl panicked when a gorgeous, rare looking

butterfly flew near her, and she actually screamed and swatted at it with her rolled up paper, which rather horrified me.  Her chuckling father had a word and I wondered how well he’d explained the day’s activity to her.  And how was she frightened of butterflies?  They’re not exactly notoriously vicious, blood-thirsty giant terrifying fanged stinging creatures.  I never followed the Twilight saga, but surely they don’t feature vampire butterflies.  Butterflies are the beautiful, gentle creatures of children’s stories and colouring books, surely.  I noticed that one or two butterflies and moths were a bit, uh, moth-eaten and wondered whether that was from similar encounters with children.


Moving away from such potential carnage, I was pleased to find that there were

several spots along the path where bursts of cool air emitted from vents, wonderful places to pause before moving back through the nearly stifling heat.

If the heat got to you, or if you wanted to pretend you were just chilling in the most amazing park ever, there were occasional benches along the path, allowing you to pause to absorb all the peaceful beauty and the myriad fascinating, gentle creatures flying around the tent. 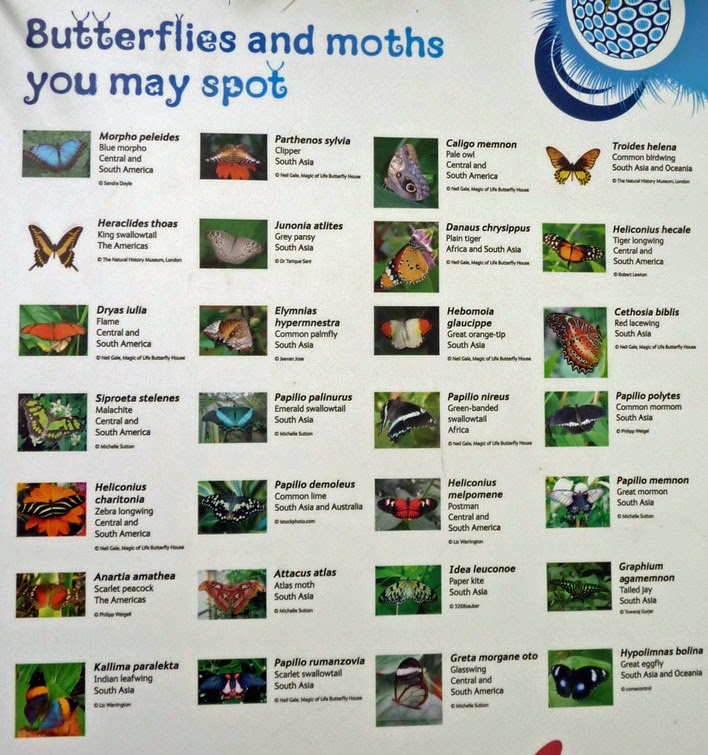 There was a sign with a chart to help identify the numerous types of butterflies you might see, showing a picture and giving the Latin name, which I promptly ignored (eg Junonia atlites), and the cuter, often apt ordinary name eg Grey Pansy. Some other marvellous species either in the tent then or due to hatch later in the season were the Great Orange Tip (sounds like tea), Flame, Malachite, Red Lacewing, Zebra Longwing, Great Mormon (nothing to do with

Utah or the Osmonds), Scarlet Peacock (presumably sponsored by Cluedo) and the Postman. The latter got its name because it apparently follows the same path from flower to flower each day. The chart has enabled me to identify, possibly incorrectly, several—but nowhere near all--of the lovely butterflies I managed to photograph, although many of my pictures are just blurry colours. But seeing them was the joy. 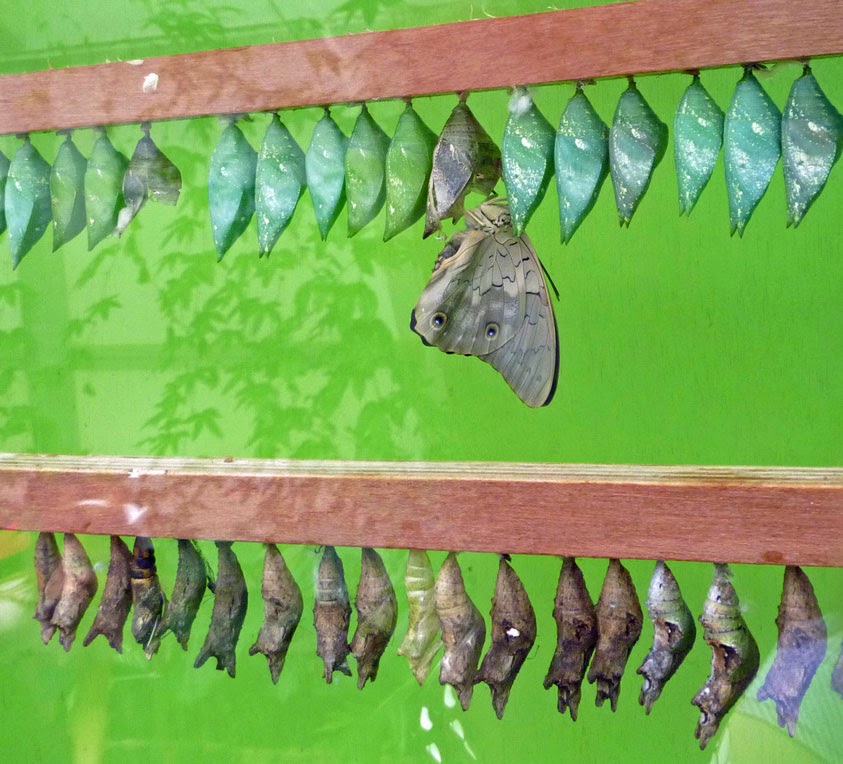 Near the back of the tent was a ‘hatchery’, effectively shelf-like rows of cocoons (pupae) in different stages of metamorphosis.  It was an amazing sight and
educational for the children….and for those of us who needed reminding about that near miracle after giving such things little thought since the fascination of first learning what happened to caterpillars.  Clearly, if you happen by at the right time, you can watch a butterfly emerge and shake the moisture from its wings before taking its first flight. Astounding stuff. 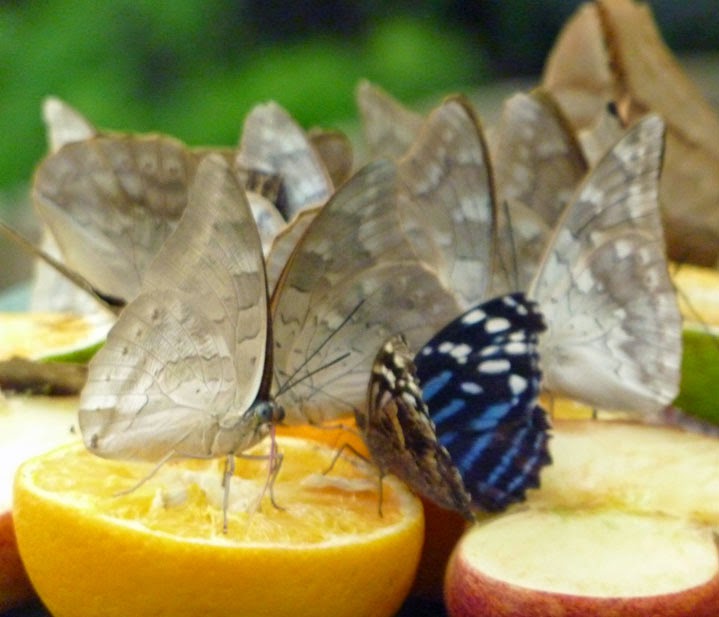 Deeper in the marquee was a table of sliced fruit, which at first seemed to have big leaves growing out of it, until
you realised the leaves were nearly intoxicated butterflies that couldn’t bear to leave the apples and other treats.  It provided an excellent opportunity to study the butterflies close up before they raced away, and to observe their impressive mimicking camouflage—not just looking like leaves and more bitter tasting butterflies, but some with spots that could easily be mistaken for the eyes of a bigger animal, understandably named Owl Butterflies. The liquid from

rotting fruit is apparently a favourite tipple for them.


There were plainer moths, as well; not everything was breathtakingly stunning, but often a bit of patience showed you otherwise.  What seemed to be a dull brown moth opened its wings to reveal a stunning royal blue colour. If it flew away before I got a good look at it, there was always another chance—another butterfly, or another encounter.  The atmosphere was so pleasant and calm, I retraced my steps to the beginning to find a particular butterfly I hadn’t been able to see close-up yet, particularly as it was my

sole chance since I had no plans to visit Peru to see the gorgeous Blue Morpho or India to see the Tailed Jay any time soon.  I had several continents’ worth, a world of bewitching butterflies, here within a short stroll, and I didn’t have to search for them or crouch down in a wet meadow waiting hours for the privilege. 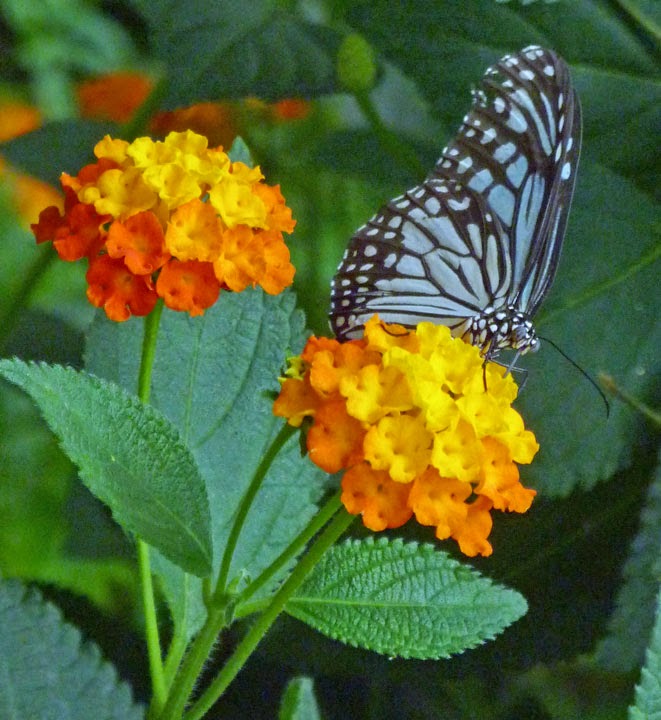 At one point, a butterfly landed on my shoulder, and another on my hand, and they didn’t seem keen to leave anytime soon. I hate to think that means I smell like rotting fruit or worse. I will pretend it’s because I’m easily mistaken for a flower. But that brief electric connection with nature was a delight. After sitting on a bench to take in the marvellous experience for just a bit longer, I reluctantly decided it was time to move on as I had other plans.  You are asked to check yourself in the mirror before you go through two ‘doors’ (long strips of plastic) to ensure you’re not smuggling any out to freedom and a new life in South Kensington, which

might not suit the butterflies and could upset the ecosystem and the native insects.  As with most attractions, you exit through a shop, this one little bigger than a closet and full, as you can imagine, of butterfly-shaped things and butterfly covered things (butterfly Oyster card cover, anyone?), which I hope even that naughty exterminator child was charmed enough to want by the time she reached the end.  Even I learned

more about butterflies, and whilst I would never introduce myself as an expert lepidopterist, I thought I’d finished learning long ago. 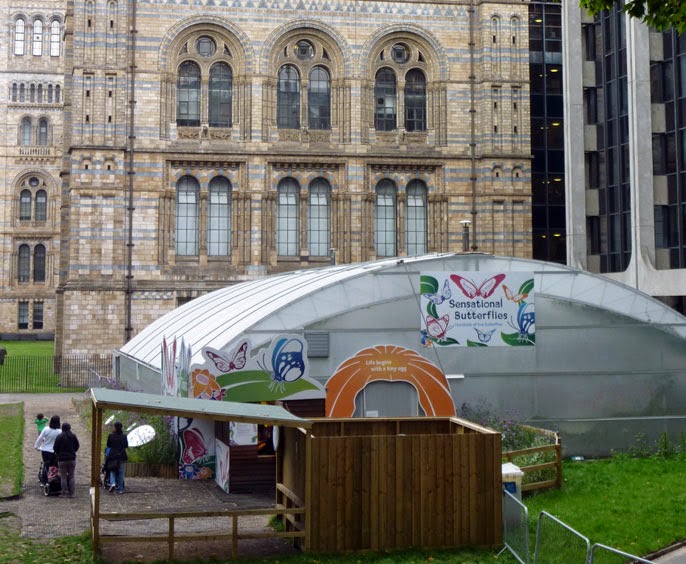 If you don’t manage to get there this year, do try next year.  It’s usually on the east lawn of the Natural History Museum from early April to September, helping you to welcome the new Spring or cling to the last throws of summer.  You can book online for a timed entry and collect or buy your ticket at the tent, so there is no need to join the massive queue that often leads into the museum itself.  I did pop into the museum briefly after my marvellous time with these captivating creatures, but it seemed a bit of an anti-climax when everything in there was long dead, although I will return. It’s a joy just to admire the astonishing architecture and, after all, it’s free.

The exhibition sadly finishes on 14th September 2014 but undoubtedly will be back. 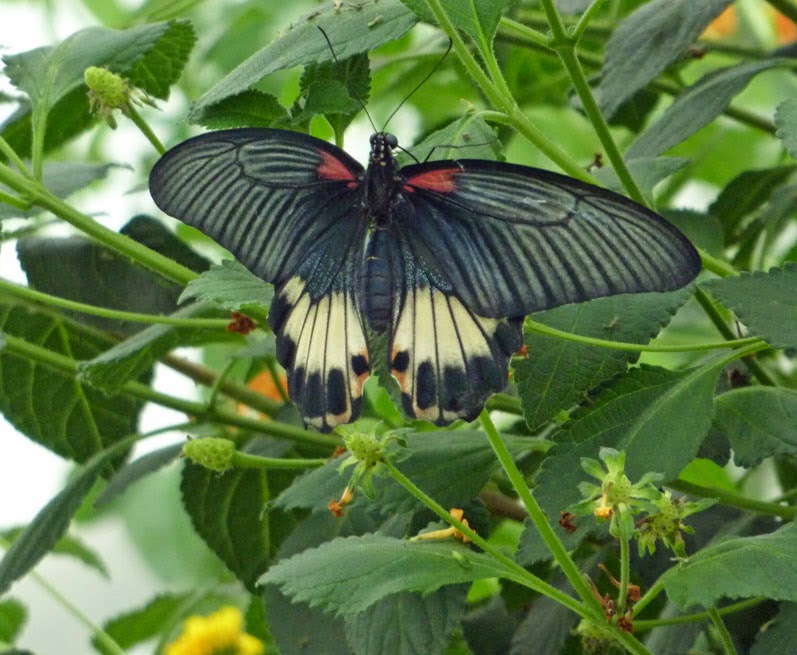 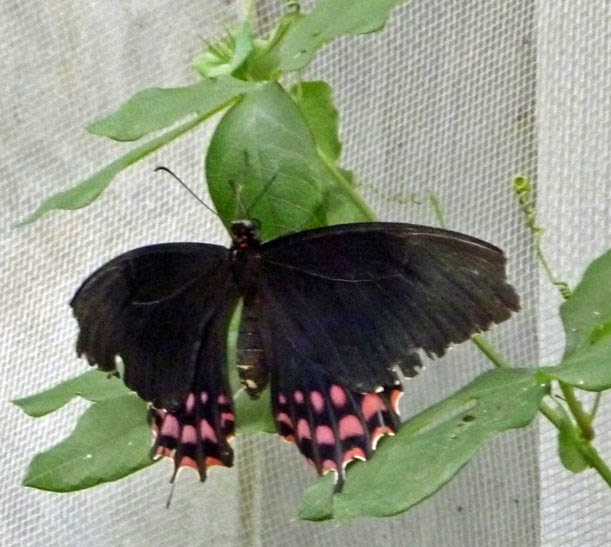 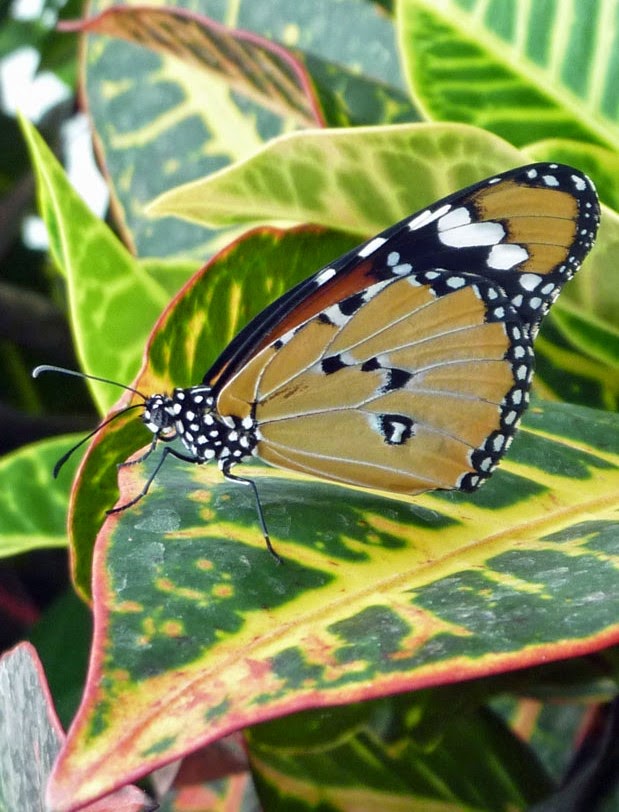 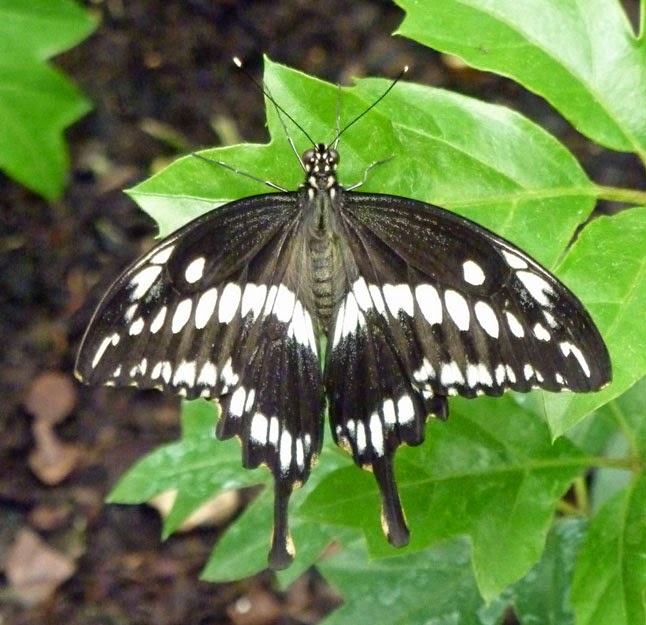 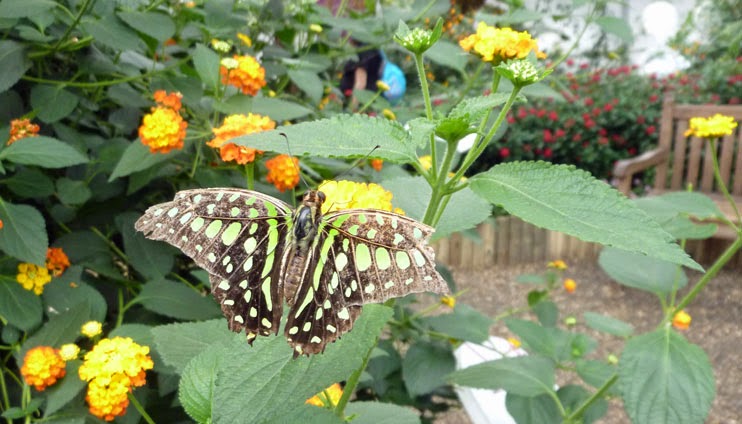 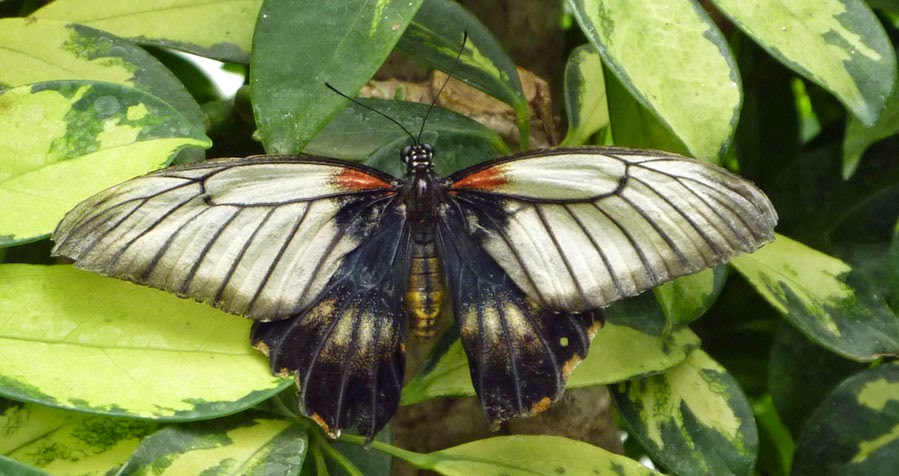 Posted by Brain Tracer at 12:00 am No comments: