Art and Sparkle in Piccadilly

This will be a meandering little blog about a meandering little walk I had in Piccadilly the other day. It’s been quite a sorrowful Christmastime, but just that little wander managed to lift my spirits. I love London, and I love how, even though I’ve lived here for over 20 years, I still come across undiscovered pockets and new surprises that make me smile, particularly because parts are always changing.

On this day, I was headed for the Criterion theatre in Piccadilly Circus as I had an extremely

cheap ticket to the matinee of 39 Steps, which I’ve wanted to see for ages. My dreadful financial state (I was made redundant some months ago) means I rarely go out now, feeling the need to devote my time to more productive measures principally involving tweaking my c.v. and finding places to send it, then re-calculating my mass outgoings to see what else I can cut rather than lose my precious cats and my home. Still, I missed the theatre, and it was a really cheap seat. And, as you can probably imagine, I missed just leaving the house and briefly

not focusing on the impending doom.

As the train wasn’t as late as usual, I arrived with time to kill and headed for the always surprisingly quiet and pleasant Starbucks on Piccadilly near St James’ Palace, taking a quieter route to avoid the Christmas crowds. First, I passed through Trafalgar Square and eyed the ever-present oddities there surrounded by entertained tourists, in this case 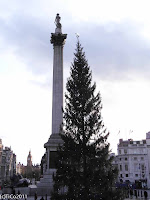 men dressed as Batman and Charlie Chaplin, and someone with comical repartee on a tall unicycle in front of the National Gallery. I also snapped the famous Christmas tree from Oslo, a warming sight but somewhat muted (although muted is preferred when compared to some ostentatious or bizarre trees….see the South Bank Centre at the end of this entry.)

Even when I am barely celebrating Christmas, as is the case this year, and am thus a bit Scrooge-y, I find that I always enjoy Christmas lights. It does break the monotony of walking down a plain street, after all. It can be an added beauty, or at least a bubbly bit of sparkle even if it’s not 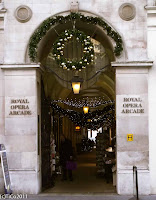 to my taste. I paused again across from the entrance to the Royal Opera Arcade (and later the Burlington Arcade) to admire its Christmas garnish for drawing in the shoppers and making things a bit more special, before continuing on my walk.

Always keen to pass through a leafy square when I come across one (weak pun intended), I entered St James’s Square and was drawn to a huge contemporary sculpture that set off the nearby traditional hero-on-horse. It was certainly different and made me think of that Beatles album cover with severed doll’s heads. I loved how offbeat it was for this staid setting.

My general high speed walking and lack of patience has not, I’m afraid, adjusted suitably for my cu 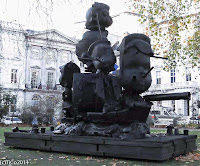 rrent state of unemployment, so I rushed through the square when I really should have paused to absorb the picture. Or at least to take a decent one--I did snap away with my bad handbag camera, but I was a bit inhibited by a burly security guard type nearby and signs around it warning people off. I can imagine it would otherwise be quite an adventure for a child prone to climbing, as the bronze is a massive five metres by seven metres, a bit like a scaled down ship in the Square. American Paul McCarthy's sculpture is called 'Ship Adrift, Ship of Fools 2010-2011' and is apparently part of his 'The King, The Island, The Train, The House, The Ship' exhibition at the Hauser & Wirth gallery in Piccadilly, which runs until 14 January. The St James’s Square sculpture remains until the next day. Naturally, the gallery’s website describes that artwork thus: “The massive new sculpture is a 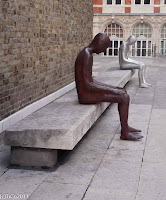 contemporary rephrasing of a medieval allegory, depicting a world of power without principle as the ship and its denizens hurtle obliviously towards their own destruction.” That’s pretty much what I was thinking when I went past. But if you’re in the area of Piccadilly shortly, do make your way through this peaceful square and enjoy this unusual sight.

Next, rushing up St James’s Street, something caught my eye in a 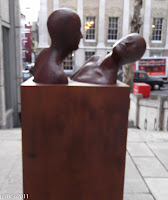 pocket of concrete space on the right, which I initially assumed to be private but then realised it was open to passers-by. So rather than pass by, I cautiously went up the stairs to find myself in what is called The Economist Plaza, a small paved yard outside the publication’s office that seems to be used for temporary art installations. It is currently inhabited by several Antony Gormley-like figures, seated on benches and emerging from plinths. I only stopped briefly and, still with only my low-quality handbag camera, snapped some blurry images of the

The mostly cast-iron figures form an installation by Icelandic sculptor Steinunn Thorarinsdottir called Situations, here since September with its run extended from early November owing to popularity, although I don’t know until when. The ‘show’ has been curated by Peter Osborne of Osborne Samuel Gallery . I won’t attempt to evaluate them artistically here or muse as to their meaning; I just admired them, particularly as I came across them

unexpectedly. I was alone in a crowd of them for a bit and loved it.

In this day of dreadful theft of public art for scrap metal—such as the Barbara Hepworth’s Two Forms (Divided Circle) and Diane Gorvin’s Dr Salter's Daydream —it is wonderful to see that people have not yet shied away from the concept, and that not all of it has disappeared. Sadly, Steinunn’s website shows that she is not immune, as her Voyage was stolen from a four-metre high plinth in Hull in July and has not been recovered despite arrests having been made. One hopes that CCTV and new restrictions will curb this deplorable practice. One hopes. The scrap metal dealers out there who accept as scrap an obvious artwork and hand out cash for it (as they do railway cables and lead from church roofs)

should be ashamed, but clearly have no shame. Or sense of value.

Anyway, despite my drifting onto a depressing flint of reality there, what I saw that morning uplifted me. It is marvellous that people go to great efforts and expense to make such treasures available to us for free, when most of us pass by unaware that it is there. But those who stumble across it are privileged with a secret illumination. And London is full of these treasures; they are everywhere.

When I managed to reach Starbucks on Piccadilly, I barely had time to pour the Chai Tea Latte down my throat as I’d been so pleasantly distracted on my journey. I ended up racing through the crowds on Piccadilly to reach the Criterion and take my place at the utterly wonderful production of 39 Steps, which I highly recommend—it’s delightful, amusing, fast and fun.

I may witter on about that specifically another time. But do go.

After snapping a vague shot of the lights of Piccadilly Circus and the Regent Street Christmas lights after the grand show, I made my way to Covent Garden despite the awful rain because, suffering from Unemployed Syndrome, I mistook the day for Thursday (the

Thursday food market. Instead, I joined the tourists and shoppers in admiring the massive Christmas tree and reindeer in front of the market buildings, the giant baubles decorating the main parade, and the topiary candy canes hanging from the Central Avenue, to the tunes of a talented busker.

After that, I rushed to the train station to head home, feeling tremendously better than when I had left home, which I should try to do more often, even though I have so much to do there now. But London always 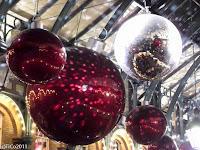 lifts my spirits, just wandering around the streets, even without the Christmas lights.

I did mention the South Bank Centre Christmas trees, which I saw a week later when I met a friend there for lunch (which we had to abandon as all the restaurants were packed w 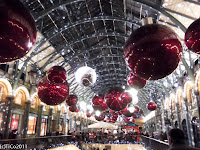 ith families, so we crossed the river to the Strand and had a lovely lunch there instead). There were some beautifully plain ‘real’ trees outside donning only white lights, like my grandparents used to have on their deck and all around their house. But there were also white ones and bright red ones—I don’t mean the lights but the trees—and trees decorated with flags, and one adorned with pigeons, of course— 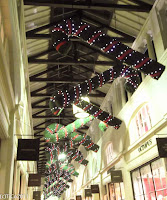 fake pigeons. Quite awful, but still welcome as they were festive. And different. And, I like to imagine, a little bit tongue-in-cheek. So until my next meander that moves me, I shall leave you….Do go have a meander of your own. I am sure you will always be rewarded with some delightful discovery if you keep your eyes and mind aware.

(Incidentally, I would update my blog more often if Google would let

me without repeatedly insisting that I clear caches, allow cookies from any stranger, and shut off all my security software just to sign into my account! Everyone else can cope

without making such demands; it makes me wonder what Google is up to….)
Posted by Brain Tracer at 10:44 pm No comments:

Things to Come (That Have Gone)

One of the many things I thought I would do after being made redundant was to keep up this blog better, writing regularly, as well as update my website on music reviews and the like (I have photos and notes of dozens of concerts I’ve never written up that might be worth a re-visit, most recently The Bible reunion, Neil Finn’s PaJaMa Club live UK debut, Johnny Mathis, and many others).

Unfortunately, I’ve somehow managed to have rather neglected both, but I think I shall somewhat weirdly go ahead and write up my typically detailed accounts of the various things I’ve attended, even though they won’t be current and are thus not news, and perhaps not so interesting. But I will anyway.

So the things that I will be writing about in the near future include the following events I have attended since leaving work in August:-

Obviously, that’s just a dull list right now, but I hope to bring it to life soon with detailed descriptions of the various wonderful events and lectures I’ve had the pleasure of enjoying during my enforced leisure time. So if any of that seems remotely interesting, tune in again and I’ll get cracking for a change (in between stints of searching for my dream job—or at least a suitable income--and re-jigging my c.v.) and keep my blog better updated, even if it’s largely updated with out-of-date stuff. But I hope some of it might be useful reading for people who could not be at these events but would like to learn more about them. Later.

Posted by Brain Tracer at 1:13 am No comments: